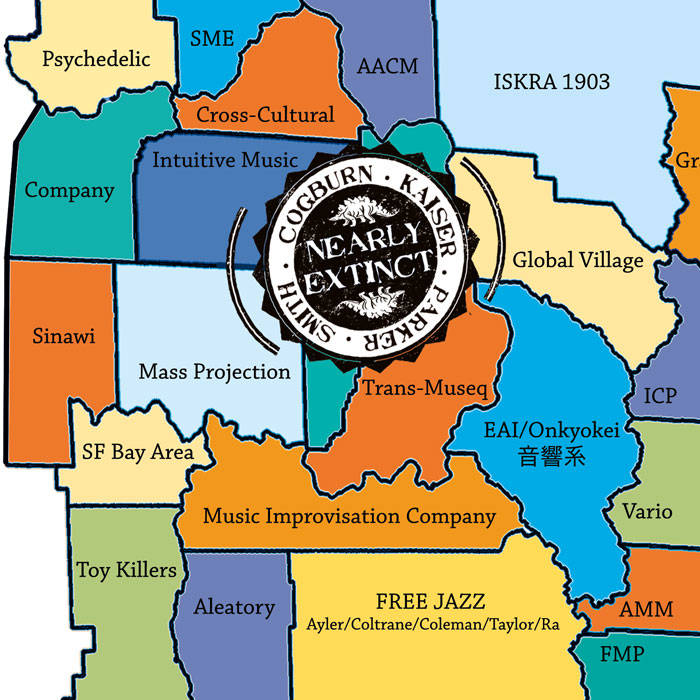 In the mid to late 1960s, American Free Jazz travelled across the Atlantic to become free improvisation. British musicians John Stevens, Derek Bailey, and Evan Parker, and Hanover’s Gunter Christmann were among the first to move away from American jazz-based methods towards a more inclusive but non-idiomatic method of improvising. Such diverse countries as Belgium, the Netherlands, Japan and South Africa also added ideas and concepts to the global concept of free improvisation before finally traveling back to the USA.

The title and cover artwork of Nearly Extinct refers to languages or methods of improvisation that are either no longer practiced or deemed by some to be "out of style”. Featured on the CD jacket map of improvisation are such historical methods as:

The music on Nearly Extinct draws from all of these traditions, and recombines them in new and kaleidoscopic ways. All of the various methodologies represented on the CD’s cover map have been studied and grokked by all members of the ensemble, resulting in an improvisational paella of extraordinary juxtapositions and combinations of ideas and sounds - with a wider range than is usually heard in contemporary 21st century free improvisation.

Despite many attempts over the years to state the contrary, improvisation remains a method and not a style. Nearly Extinct confronts certain methods head-on, while freely using material not commonly associated with the musicians who originally established those concepts. Henry Kaiser, for instance, brings in ideas from both transcendental Korean shamanism and ferocious psychedelic guitar musics, as well as his long-time deep knowledge of 20th century British Free Improvisation and Free Jazz. The three younger musicians bring post-AMM sensibilities and extreme attention to detail - primarily out of other British approaches from the Spontaneous Music Ensemble and Iskra 1903. All of the various methodologies represented on the CD’s cover map have been studied and grokked by all members of the ensemble, resulting in an improvisational paella of extraordinary juxtapositions and combinations of ideas and sounds, with a wider range than is usually heard in contemporary 21st century free improvisation.

Henry Kaiser is an American guitarist, composer, and deep sea diver, known as an idiosyncratic soloist, a sideman, an ethnomusicologist, and a film score composer. He was a pioneer in the first wave of American free improvisors, back in the early 1970’s.

Steve Parker is a trombonist, composer, and curator living in Austin. He directs the hybrid arts series SoundSpace at the Blanton Museum of Art, is an artist in the new music outfit Ensemble Signal in NYC, and teaches at UTSA.

Chris Cogburn is a percussionist and curator living in Austin and Mexico City. His artistic practice and curatorial interests are rooted in the collaborative context of improvisation.

Damon Smith's explorations into the sonic palette of the double bass have resulted in a personal, flexible improvisational language based in the American jazz avant-garde movement and European non-idiomatic free improvisation.

The unusual sonic fidelity of this audiophile recording, made in Austin, Texas in the spring of 2015, brings all the musical layers into clear, vibrant, and colorful focus.