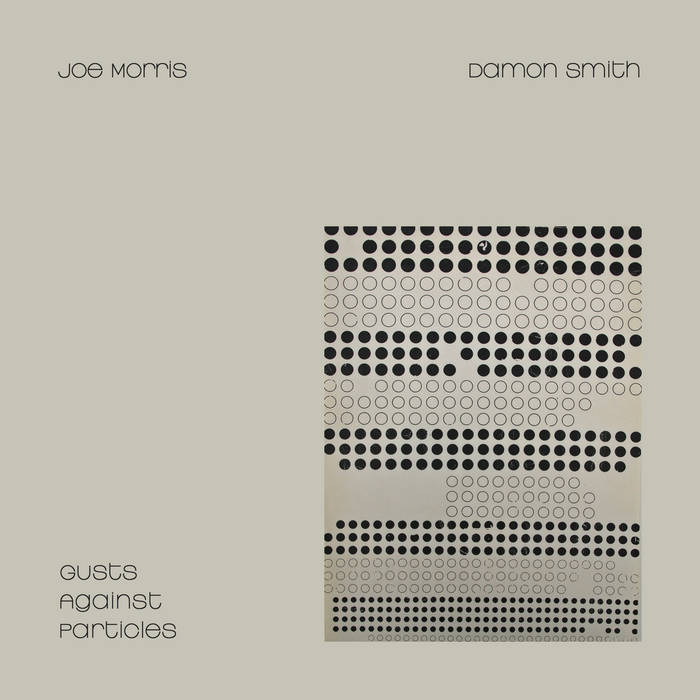 This is a release on Open Systems: Records
joemorrisdamonsmith.bandcamp.com

This LP is the first release for Open Systems and is a limited, hand numbered edition of 200 copies. The digital version is unlimited.

Duets are conversations, pure and simple. They can be long threads, emphatic, full of query and answer, or emotion and subtlety. At best, they have all the hallmarks and inside commentary of an old relationship, but even first-time meetings can feel like the participants have known one another for ages. You might know that feeling, too: someone you’ve been aware of and finally get to spend time with, over the minutes or hours that follow a gentle easing-in becomes a gush of ideas and rejoinders. Joe Morris (b. 1955, New Haven, CT) and Damon Smith (b. 1972, Spokane, WA) have traveled in similar improvised music circles for decades, though Gusts Against Particles is their first duo and first proper album together. The two met in 2006 under the guise of sessions for Healing Force, a super-group CD put together by guitarist Henry Kaiser to explore the late music of Albert Ayler. At that time Smith was living in the Bay Area and cutting his teeth in its free music scene while Morris was based out East, teaching at the New England Conservatory and leading a number of harmonically and rhythmically game-changing small ensembles.

Flash forward 13 years and Smith was living and working in Boston, performing with artists like pianists Pandelis Karayorgis and Eric Zinman, drummers Ra Kalam Bob Moses and Curt Newton, trombonist Jeb Bishop, and cornetist Stephen Haynes. Just prior to the bassist’s 2019 relocation to St. Louis, a few concerts were set up with Morris alongside this studio recording. Of Morris, Smith says “I got into his work pretty soon after getting into the music. I love that he knows free jazz as well as the European traditions. He is well versed in the harmonic language of Jimmy Lyons, which is foundational for me since I came up as [alto saxophonist] Marco Eneidi's understudy. Playing with him is more like playing with a horn player than a guitarist. It is unlike playing with [Sandy] Ewen or Kaiser. The main thing about playing with him is I am able to think and play faster and more effortlessly than on my own.”

Morris has also worked frequently as a contrabassist, though the guitar is his primary and longest-lasting mode of expression. He’s performed and recorded in duo with other legendary bassists in free music, people like William Parker, Barre Phillips, and Christian Weber, not to mention in deep dialogues with other modern instrumental travelers (eg. reedist Anthony Braxton, saxophonist Evan Parker, trumpeter Nate Wooley, pianist Matthew Shipp, and guitarist Mary Halvorson). So, there is a lot of history to reckon with, as well as a lot of instantaneous creation. As Morris thinks back to meeting Smith and subsequent experience, he notes that “[Damon’s] playing expresses the pulse much more now on the bass than he did back then… I never generalize in any way about the particulars of anyone I play with. I listen for very specific things no matter who I play with, and I respond and interact in very specific ways depending on what I hear from them and what they do in response to me.”

In terms of the dialogic meat, Morris and Smith are both masters of an expanded but very distinct palette, the guitarist using muting objects, pedals, and picking motions that create a hive of sounds from scrabbled density to ghostly drabs hanging between nodes of a western scale. Smith is graceful and also knows how to manhandle the bass, interweaving additional bows, brushes, woody palm-swabs and plastic chain as well as making his presence known through a trusty, surefooted pizzicato walk. The array of string sounds on these pieces is dazzling and often dense, and it’s sometimes hard to believe this music comes from two people composing spontaneously. Morris puts it this way: “the inspiration is in life and the decades of trying to grow as an artist. The music is made with skill and quick decision making in the moment, using the knowledge I have about improvising. That includes close listening and doing the best I can to decipher the other musicians’ contributions.” Now, the onus is on you, the listener, to enter the conversation and the experience.