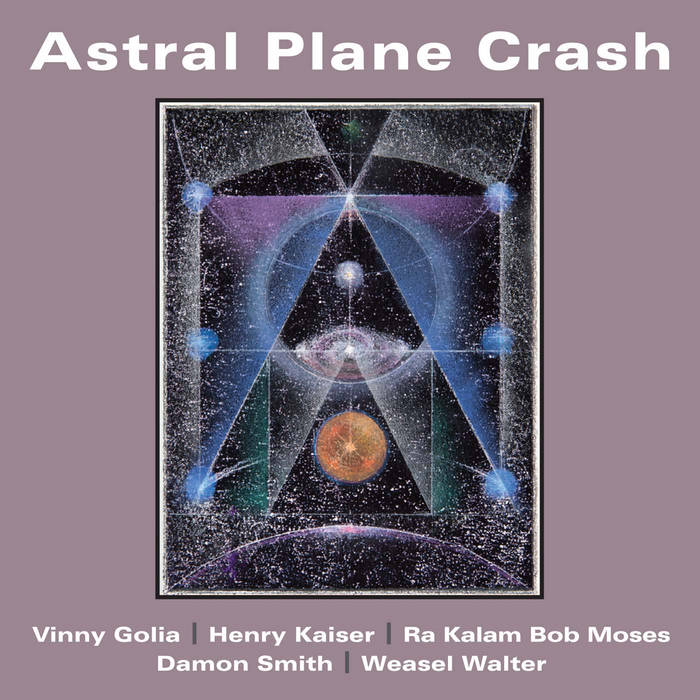 Audio uploaded as hi-res 24 bit files.
CD comes with a deluxe 12 page booklet with reproductions of 10 pastel drawings by Jordan Belson. DL comes with a PDF of the complete album art.

One Shee + Note on Artworkt:
"Astral Plane Crash" features almost 80 full minutes of detailed, colorful and communicative free improvisation by a special quintet of veteran musicians including Vinny Golia (reeds), Ra-Kalam Bob Moses (drums), Henry Kaiser (guitar), Damon Smith (bass) and Weasel Walter (drums). The core PLANE CRASH trio of Kaiser, Smith and Walter is a long-running unit, having worked together extensively in numerous contexts on releases like "Plane Crash" (ugEXPLODE, 2009) and "Plane Crash Two" (New Atlantis, 2015). Kaiser was amongst the first wave of 1970's US free improvisers and his diverse, endless discography is legendary. Since 2005, the versatile rhythm section of Smith and Walter has collaborated on almost 25 releases together. Los Angeles-based workhorse mult-reedist Vinny Golia and mythic journeyman drummer Ra-Kalam Bob Moses join the fray here in their first time musical meeting. Golia brings a virtuoso articulation to a wide range of woodwind instruments here, multiplying the timbral variety of the group sound greatly. Those more familiar with Moses as a first rate jazz drummer for icons like Gary Burton, Steve Swallow, Pat Metheny & Dave Leibman may surprised at his current advanced free improvisation concept documented here. The results resound with clarity, as space opens up spontaneously for every combination of the players, all captured in a beautifully
transparent studio mix. Although the momentum is constant, this isn't another blaring energy music blow-out - the density crackles with sensitivity, support and mutual respect. This quintet unleashes an orchestral arsenal of articulated abstraction and explores longer narrative lines, culminating in the two epic forms revealed here. The release comes with a 12 page color booklet featuring the stunning artwork of artist Jordan Belson as a mystical visual counterpart to the sonic mindscapes of the audio.

A NOTE ON THE ARTWORK  BY HENRY KAISER
Interviewers usually ask me two particular questions about my guitar playing. However they almost never print my true answers. The reason for this has a lot to do with the almost total obscurity of one of America's greatest filmmakers: Jordan Belson.

Journalists typically begin by asking me about my influences. I'll go on for a while mentioning Derek Bailey, Gyorgy Ligeti, Hubert Sumlin, Conlon Nancarrow,  Elliot Ingber, Terry Riley, World Musics, Country Blues, Free Jazz, etc. But then I tell them that my favorite artist in any medium and the most musically influential of my heroes is the filmmaker Jordan Belson. This is invariably met with a blank look; followed by my enthusiastic exposition on Belson's work and its effect upon me, that is without fail deleted from the interview by the time it gets into print.

When I first saw Jordan Belson’s films back in 1969, I was completely blown away, because his films’ imagery was exactly like my dreams.I have no narrative dreams with humans in them - only clouds of light and patterns in space. Synesthetically, I see this same sort of imagery when I listen to and when I play music. I met Jordan in the early 70’s and remained in-touch with until his final year on the planet in 2011. From the first time I picked up a guitar, Belson was my main influence in what I wanted to do with music.

Belson, a long-time resident of San Francisco’s North Beach district, made more than 40 short, abstract and non-objective films since 1947. In the '60s and early '70s it was fairly common to see them in programs of experimental films the world over. He made these films in his tiny apartment on a specially constructed optical bench. The films are 100% special effects. Sometimes cosmic, sometimes sub-molecular, they are like abstract paintings come to gentle and furious life. Simultaneously windows into the depths of internal spiritual processes and mega-galactic interplay, the films resemble fantastic living creatures of light that briefly enter this dimension for each screening. Even Belson's early work surpasses what George Lucas' ILM team needs millions of dollars to accomplish. Belson's work was a crucial influence on the psychedelic ending sequence to Kubrick's, 2001, A SPACE ODYSSEY. Director Phil Kaufman hired him to do some effects used in THE RIGHT STUFF. Belson has been around for a long time, but he kept the lowest of profiles. He did not even place his own name on-screen in his films. Only the film’s title and the word END appears in them.

The second question that music journalists usually ask is, "What do you think about while you are improvising?" Playing music for me is largely an internally visual experience. Even though it may look like I'm smiling at the drummer or the piano player, inside my mind, and without the addition of recreational chemicals, I'm drifting thorough glowing clouds of light among coruscating fractal and geometric forms that shimmer in and out of existence. Rivers of light, like oceanic streams of phosphorescent plankton inflamed by the wakes of playful sea lions, dance in time to the music before it happens; giving me my silent cues, like the clouds a glider pilot watches to catch updrafts. It's pretty much like I have a Jordan Belson movie running inside my head all the time, but it's easiest to look at when I'm playing music and on the edge of some kind of natural trance state.

When you were a pre-school kid did you, like me, lay in your dark bedroom at night and press on the lids of your eyes to generate phosphene patterns of internal light that danced in your head before going to sleep each night? If you can remember those images - have you ever thought of the similarities that they bear to spiritual and psychedelic art through the ages? From a Tibetan mandala, to a Fillmore poster, to modern computer art, to a Rothko painting there is a not-so-hidden connection between the way our brains are wired and man's quest for spiritual understanding of the universe through visual art. When I saw my first Belson film during my second year of college, I immediately recognized this and was nonverbally transformed by his work to see all sorts of connections that I'd never seen before.

Belson is one of the most original artists I know of in any medium. He created a new art form and the techniques to realize it. But beyond that, the content of his films is deep, sublime and enlightening. The films mean something, they communicate profound knowledge in dynamic, moving, visual terms. Anyone can immediately access the beauty and surface content of his work. I think Jordan has somehow found a way to project his many years of meditative spiritual quest and research outward onto film stock. Words fail in describing the richness of Belson's fantastic imagery. See the films; they will illuminate you.

In addition to his filmic output Jordan created paintings and various other forms of graphic art.  At the suggestion of Damon Smith, Jordan’s partner, Cathy Henrich and collector Raymond Foye allow us to reproduce a gallery of 10 of Jordan’s cosmic pastels for this release of cosmic music.