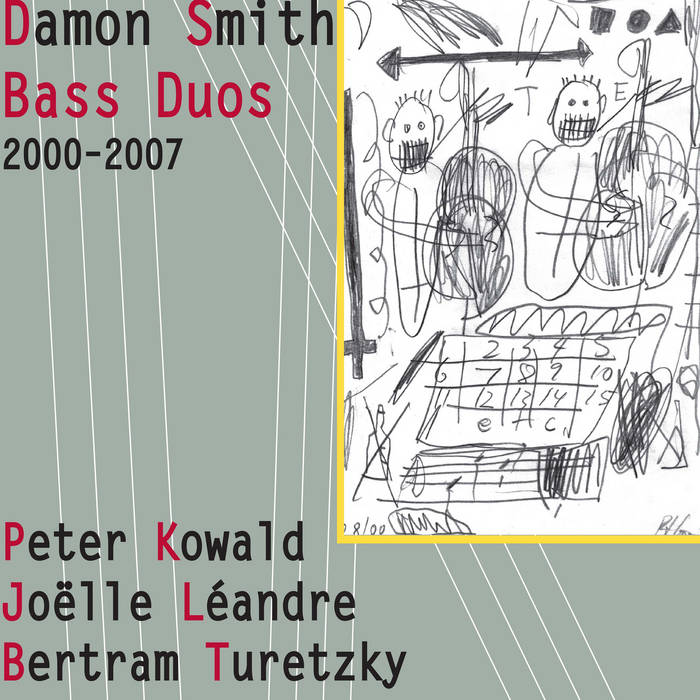 I met Joëlle Léandre when she was a visiting professor at Mills college in 2002. This was very exciting, as I had been collecting her albums since I started to play the double bass and she was an important influence on my work. I had a bass lesson scheduled with her the day we lost Maestro Kowald. She was very close to him and it was devastating to her. For me, it meant losing a role model; for her, it was losing a close friend and supporter. We had a long phone conversation and she told me many stories about him. A few days later, Henry Kaiser graciously offered to let me record a solo for Kowald in his home studio. I thought a bass duo with Joëlle would be more fitting and I believe it was. Still, the sadness surrounding the session kept us from dealing with it for many years. I would get it out and try to consider track order or titles, maybe email Joëlle about it, and that would be the extent. Both her work and his remain a guide for me as I continue my work in the music. I am glad to finally get this session out into the world!

The reason I started playing music was because of seeing the great Mike Watt play with the band fIREHOSE. His extremely physical and multi-textured approach to the bass guitar logically pushed me to improvised music and the double bass. In the 1990s I had formed a bass quartet with George Cremaschi, Lincoln Smith, and Morgan Gubberman and we decided to ask Watt for a composition for our next performance. Watt replied saying he has lots of compositions and that he would just come up and play them with us. The music he brought consisted of his pieces from the monumental minutemen album Double Nickels on the Dime. I am a bit too young to have seen the minutemen so this was an incredible experience: the first time I heard these songs live was playing them with Watt! I should mention that Watt's bass duo DOS, with the great Black Flag bassist Kira Roessler, is now his longest running band and the first time I ever heard a bass duo was one of their albums! We got quite a nice guarantee for the show and I asked Watt if we could spend half of it bringing Bertram on board. Watt was excited by the idea! Bert was into playing a rock club and said "I used to play places where you had to check your guns and knives at the door. It will be great!" At the show a punk rocker yelled, "Play louder" during a break in his set that night. Bert replied, ”You listen louder.” I ended up getting lessons from Bert, organizing many Bay Area concerts and workshops for him, and we developed a friendship. For me as a young bassist, he was very generous with his time. His commitment to improvised music was very inspiring as was his tireless effort to catalog the available timbres and techniques for the instrument, resulting in his book The Contemporary Contrabass. Originally meant as a resource for composers, it is an incredible guide for improvisors trying to deepen their relationship to the instrument. During a phone conversation one of us casually suggested a duo album. The magnitude of recording with this master did not sink in until just a few days beforehand! It was originally released in an edition of 100 CDRs that sold out pretty quickly.


These experiences are formative for me and have shaped the way I work with the instrument in improvised music. Not everyone has the opportunity to go directly to the source of the area they are working in, and these duos are certainly the source for me. Dave Holland and Barre Phillips made the first improvised double bass duo LP. It seems to me that Kowald's series of three LPs on FMP with Barre Phillips, Maarten van Regteren Altena and Barry Guy solidified it as a working method, and this meant having the duo as an available format in which I could work. My longest running bass duo is with the Texas bassist Thomas Helton, and hopefully an album will come out of our work as well.

PDF of full cover art & liner notes including the original Mirrors, Broken, But No Dust notes included with all downloads

Broken mirrors:
Recorded on 28 April 2000 at Gallery 2310 Oakland, California; this is one piece with an index point for convenience only.

Reflections on April 28th 2000:
Recorded on 3 May 2000 in Oakland, California
Remastered by Weasel Walter 2021
Front cover drawing (reproduced above) by Peter Kowald; design by Kowald and Jürgen Schäfer.

Titles from English translations of poems by Andrée Chedid