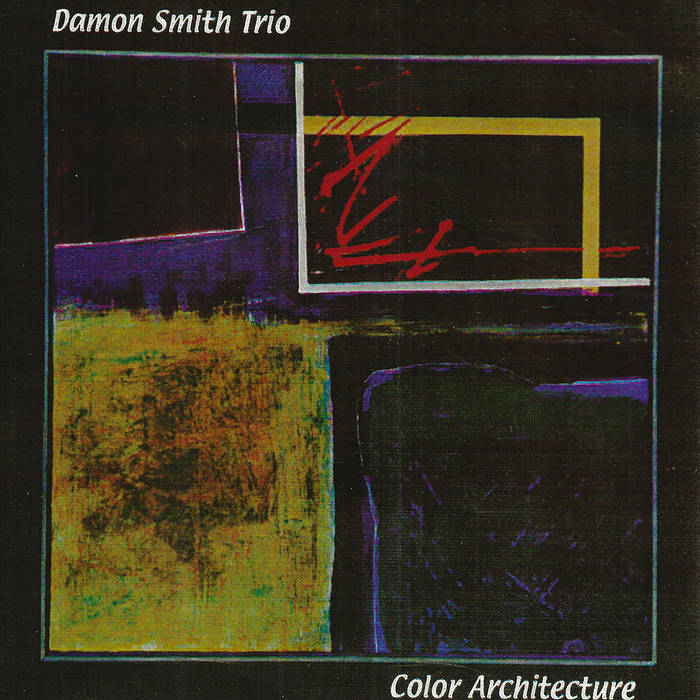 Composition notes:
“Color Architecture #1 for trio, to Tom Schultz”
Color Architecture is a notation system inspire by the abstract expressionist paintings of Tom Schultz (and the graphic scores of Roman Haubenstock-Ramati). It is a way of arranging sounds that the improvisors pick themselves. This piece has a single traditionally notated line inspired by the late Jimmy Lyons. “Color Architecture #2 for percussion solo” and “Grey light for solo flute, to John Stevens” are based on similar concepts.
“Lines for trio, to Paul Klee.”
This is a simple graphic score consisting of three lines, inspired by small book of drawings by Paul Klee.
The solo bass piece as well as “Elegy for Glenn Spearman” are improvised memorials to three of the great creative artists who left the planet this past year: Fred Hopkins (I saw Fred play the night I got my first bass); the great Japanese double bass/live electronics pioneer Motoharu Yoshizawa, and the tenor saxophone legend Glenn Spearman.
The rest of the pieces are just slightly less than collective improvisations, due to the inclusion of many of the flexible compositional structures I have come up with over the years (oc which Jeff and Jerry were not informed) or simple verbal instructions. However, to paraphrase Bill Dixon, “the line of Bryerton and Chan are their own.” The titles were taken from different books by Kandinsky, Berio, Stockhausen, etc., and quotes from musicians. The dedications are to people who have shaped and redirected my music. Also thanks to John Lindberg, William Parker, and Barre Phillips. Damon Smith 7/8/99

1.
from an interview with John Cage:
"Chance operations are a discipline, and improvisation is rarely a
discipline. Though at the present time it's one of my concerns, how to make
improvisation a discipline. But then I mean doing something beyond the
control of the ego. Improvisation is generally playing what you know, and
what you like, and what you feel. But those feelings and likes are what Zen
would like us to become free of."

Here there is both, chance element through graphic score, improvisational
structure, a picture of process.

2.
The young man, a student, finishes pissing and walks over to the sink,
pushes the cold water tap down, but without washing his hands, then swipes
off a sheet from the towel dispenser, throws it away & leaves, the water
still running

4.
What is it they're staring at,
these portraits?
the brushstrokes
still stuck
in the eyes
If you asked them
what they're staring
at they'd probably say
Nothing &
look away

5.
"What if" is an interesting abstraction of the Western mind

6.
Sound the silent alarm!
(If you are having a bad dream,
go back to sleep)

7.
Silence so acute on the 6th floor roof of a building that gradually I become
aware of voices, the drunk hubbub of bums asking for spare change, doormen
hailing taxis, shuffling of shoes on street, steady hiss of pavement as cars
go up and down Market Street; a clarity of sound I could never get down
there in the midst of it. Here are those same distances, Jeff Chan's
Burmese nightingale flute & Jerry Bryerton's crashing in full of New York
dishes.

8.
Ezra Pound:
Music begins to atrophy when it departs too far from the dance; poetry
begins to atrophy when it gets too far from music.
That doesn't mean, as Pound went on to point out, that good music is dance
music or good poetry lyrical. If you listen, though, you can feel the
movement of this music, just as your voice finds the music of good poems.

9.
You go into a room in a typical labyrinth SF flat & hear perfectly the
voices of 3 perfect unseen strangers emanating from somewhere: natural,
intimate, brief bits of conversation startling in their frankness, like the
inward expression on someone's face the moment before she realizes anyone's
looking at her

10.
Or on a crowded midday bus: the clock and shuffle of bodies across the
suddenly shifting floor, the conversations cut off abruptly, shorn of
context, the rackety noise of the electric appendage on top of the bus
causing the whole thing to shudder. Sit still and allow yourself to listen
to it in that instant while it still seems strange

11.
Listening to the Art Ensemble of Chicago right before this: "One, two,
three, there's a Jackson in your house..."

12.
This actually happened: waiting for the bus on busy street, a man walks by
carrying a cross on his back, his "disciple" pushing a shopping cart full of
his belongings, turns his head at my gaping and spits "Judge yourself,"
brittle wood scraping concrete; then a trio of kids glides up on
skateboards, waiting for bus too, one of em wearing typical loose jeans and
backwards ball cap, has 2 feet of dental floss stock between teeth dunging
from mouth (get that outta your mouth, you idiot). When bus comes I wait
for next one to avoid them; when that comes, a beautiful woman with soft
perfect breasts under muslin blouse gets on as I do, sinks down across from
me, her eyebrows carved in perfect frank Frida Kahlo arches, she seems
totally unaware of the effect she's having, when I get off the bus, it's all
I can do to keep from blurting, simply, "You look like Frida Kahlo." From
start to finish, here is that verve, that impulse, those separate colors and
strange urban rhythms.

13.
King of 25th Guerrero
The recliner
brown cushion upholstery
sits on bleak urban street
corner w/its back
tilted, footrest thrust out
imperiously, a white sheet taped
to it announces in black magic
marker the simple command to all
its afternoon subjects:
" TAKE"

14.
"Heard melodies are sweet,
but those unheard are sweeter..."
Or as John Cage said, "If you can already hear it, isn't that enough?"

15.
This happened, p. 11
A friend upon leaving town sent me a tape she'd made as a farewell.
Both sides of it were blank.

16.
The people who stand
against the door
of the train our surprised
when the floor
suddenly lowers: the woman
getting shorter and
shorter throws her eyes
at me desperate
for any sort of
a look

17.
What is this thing, property? What does it mean to want something? Even
going to the library there's a sense of anxiety then relief when I find the
book I wanted, having to take something away. Playing music the same
way--the improvisation if true is there, not owning it but giving TO it, to
the women it's made.

18.
Poet Lew Welch liked to tell the story of the full wine tour guide reciting
by rote, till spotting a child about to topple into wine vat h interrupts
himself to shout: "WHOSE KID IS THAT!"--Welch determined on the spot each of
his poems would include something that urgent & spontaneous & REAL