BPA 017 The Catastrophe of Minimalism 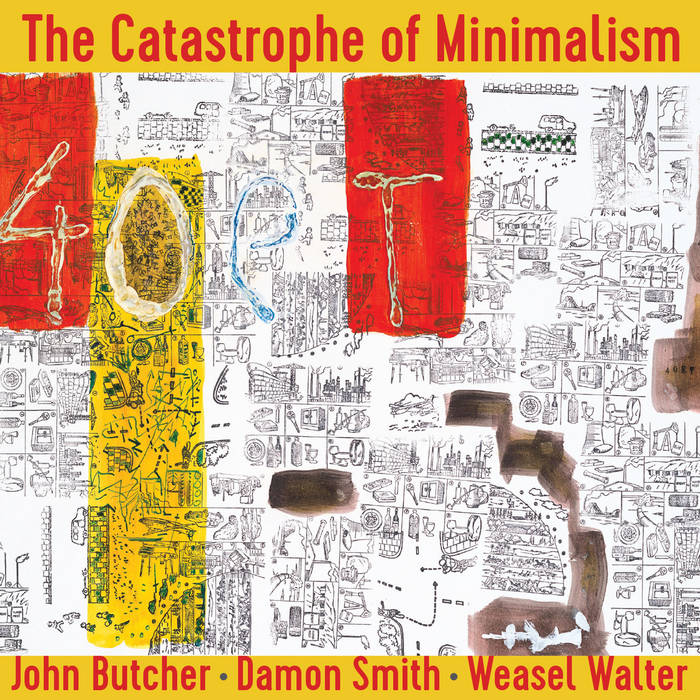 Liner notes:I first time I ever heard John Butcher play was at Colchester Arts Centre on 26th November 1992. I'd spotted a poster in the town library advertising an evening of John Cage's music to be performed by John, Chris Burn and Max Eastley. Admittedly, I hadn't too much previous knowledge of the musicians but I had read some bits and pieces about Cage. It was just a name thought, little more. The concert intrigued me nonetheless.

Colchester is the oldest recorded town in Great Britain, predating the Roman conquest of AD 43. The Arts Centre is located in St. Mary's at the Walls Church dating from 1206, some of the original parts were built against the old Roman wall (which still stands in modern Colchester).

I was no stranger to those thick stone walls at St. Mary's. Much of my formative gig going had taken place there via the monthly jazz club offerings. Charlie Rouse, Mal Waldron, Steve Lacy, Harry Sweets Edison, Stan Tracey, Teddy Edwards, Tommy Smith, Danny Thompson, Paul Dunmall and Jack Walrath were just some of the visitors I had seen there. The Cage concert, along with a number of London based gigs I'd been discovering, helped kick start something different and I had become a regular at the adventurous concerts promoted by an organisation called The Whole Ear Society staged at St. Mary's. Evan Parker, AMM, Tilbury performing Morton Feldman, Phil Minton, Roger Turner, Alan Wilkinson, Louis Moholo, John Russell, Simon Fell, Morphogenesis and various other free thinkers all passed through.

The events that took place on the stage at St. Mary's helped shape my life. I eventually became a musician as a direct result of some of the amazing things I heard and saw there. Twenty five years later I'm writing these notes and give a belated thanks to those inspiring times and to all the wonderful musicians.

The music, thankfully captured on this recording, becomes part of the realtime legacy.

Doubtless, someone in the audience that evening at 21 Grand in Oakland, California, inspired by the efforts of John, Damon and Walter, underwent a similar styled conversion - their life unexpectedly changed forever, simply by putting themselves in the right place at the right time.

Incidental Notes:
In improvised music, sometimes you go into a studio to make a record. Sometimes you do a live recording in hopes of making an album. Other times you make sure to have a concert recorded, but it is not predestined to be an album. That was the situation here. Weasel and I both kept going back to this one and talking about it over the years. I like to let recordings age. You are very sure about the music when you live with it for a few years before putting it out in the world. It was recorded at the great Oakland venue 21 Grand, Run by Sarah Lockhart & Darren Jenkins. Weasel and I were able to do many great projects both together and separately there and this was a high point in that run.
The relationship between bass and percussion is still very important in improvised music. Possibly because it needs more renegotiation than the other "standard roles". With my other close relationships with drummers we have focused on very specific things, such as the tension between swing and sound with Alvin Fielder or the innovations of Euro-improvisors and how they fit in American improvised music with Jerome Bryerton. With Weasel, it has been a far wider span. Together, we've played Terry Riley's "In C", many Henry Kaiser projects, quartet with Sandy Ewen and Roscoe Mitchell and so many other different projects, from quiet details to blistering free jazz. We still have a lot more to do.
One of my very first recordings was with John Butcher, BPA 011 Sextessense: a tribute to John Stevens and the SME, recorded in 1999 nearly 10 years before this.
John had a closer relationship with my fallen comrade, Matthew Sperry, so, it rightly took a while to play again. His work in the music has a been a beacon of rigor and integrity since he started.

The trio finds both common and uncommon ground for each musician.

I started getting this album ready at the same time as my trio recording with Joe McPhee & Alvin Fielder, Six Situations MW954​-​2. I was reading books on Dan Flavin at the time and remembered a concert featuring John Butcher & Joe McPhee my Houston Comrade David Dove had produced for Nameless Sound in the permanent Dan Flavin installation at the Menil collection. I did not see the concert but often imagined how great it must have been.
With that connection in mind, I was able to find titles for both projects from Flavin texts. Flavin's own titles for the McPhee trio and quotes from Hal Foster's great essay for this album