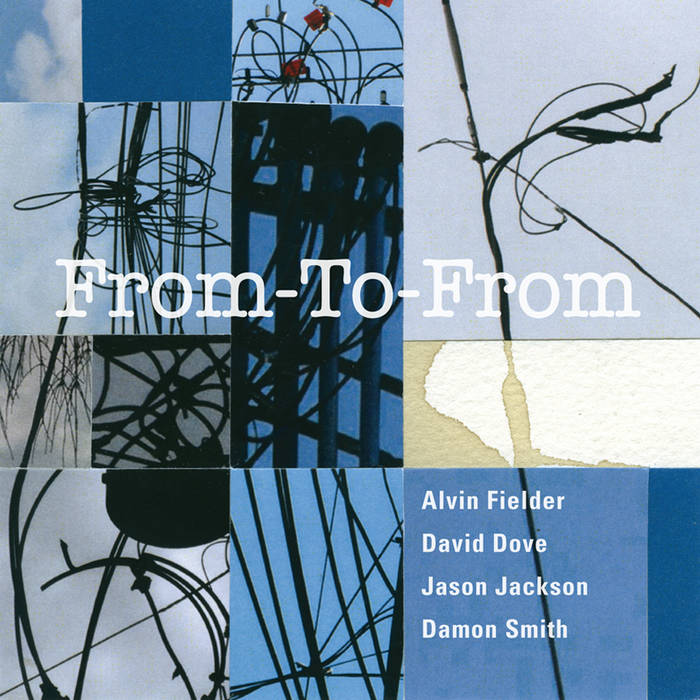 Concert footage of this quartet:
www.youtube.com/watch?v=V6-X_v_PC9s

From-To-From presents a one-of-a-kind meeting of generations and geography. On the face of things, it might seem like a Southern free music super-group and that would be enough to whet the appetite – septuagenarian drummer Alvin Fielder hails from Jackson, Mississippi and trombonist Dave Dove, saxophonist Jason Jackson and bassist Damon Smith from Houston, a recognized hotbed of art and creative music in a state whose political and cultural struggles are by now all too familiar. Fielder (b. 1935) is an institution in and of himself; a student and historian of modern jazz drumming, he was a member of the AACM in Chicago in the late 1960s before returning to his home state in 1969. Since that time he’s co-led the Improvisational Arts Quartet (with saxophonist Kidd Jordan, trumpeter Clyde Kerr, Jr. and bassist London Branch), the Creative Collective (with Jordan, pianist/saxophonist Joel Futterman and bassist William Parker), and worked extensively with Dallas trumpeter Dennis González, Memphis pianist Chris Parker, saxophonists Ike Levin, Andrew Lamb and Mats Gustafsson, and many others.

Max Roach, Kenny Clarke, Ed Blackwell, Billy Higgins, Sunny Murray and Beaver Harris all factor into Fielder’s approach – markedly different, one might assume, from his rhythm section partner Damon Smith. Smith (b. 1972) came up on the West Coast before relocating to Houston in 2010; he studied with Lisle Ellis as well as Bertram Turetzky and Peter Kowald. A student of contemporary classical repertoire and European free improvisation, Smith might seem like the antithesis of modern jazz rhythm, but it is the broad-mindedness of both players and the tension between divergent approaches that creates a pulsing sense of swing underneath the horns. Adding Dave Dove on trombone and Jason Jackson on saxophones might bring to mind such lofty 1960s units as the New York Art Quartet or the Archie Shepp-Roswell Rudd Quartet – the latter group Fielder saw at Chicago’s Plugged Nickel in 1966, and their drummer Beaver Harris was a crucial influence on allowing him to open up his concept.

Dove has certainly done his fair share of listening to Rudd and European brass exponents, but it is in education and community that Dove’s mark is felt in Houston as director of Nameless Sound, which not only presents concerts of improvised music, but also workshops to young Houstonians of varying means. It’s a treat to hear him play in such a loose, swinging and free context as this quartet; his compadre Jason Jackson is a young firebrand (alto, tenor and baritone) who came up in the Nameless Sound Youth Ensemble and now works as part of Norwegian bassist-composer Ingebrigt Håker Flaten’s group The Young Mothers. Across these six pieces, which range from employing bells and little instruments to raging fracases, one gets a distinctness within this ensemble – clearly drawn from ancestral bebop and free streams, their tempestuousness and feeling are utterly contemporary.

A miracle is defined in some circles as an act of god, an amazing event with supernatural overtones that involves transcendence, and a divine intervention. In other words, a miracle could be another name for an excursion in sound and silence, as instigated by this quad alliance of Alvin Fielder, Dave Dove, Damon Smith and Jason Jackson. They operate within the world of creative music (any music that procreates itself in performance to create an entity greater than its seed). Regardless of style, it is informed by all music that exists, known and unknown. Most musicians don’t like labels. They are more concerned with playing music than boxing it in a corner called style. The language is called freedom, the freedom to use all the sounds, all the rhythms, melodies, motifs, textures and colors that exist. Using them the way they hear, responding, interfacing, breathing together. The goal of this music is to heal, to uplift and inspire the listener, to activate their higher self. In doing so, the world is changed. Dave Dove music, Alvin Fielder music, Damon Smith music, Jason Jackson music, all spontaneous composers who have committed their lives to the music. What are the rules to becoming a master improviser? Practice one’s musical instrument until it is an extension of our muscle memory and part of our internal audio systems; training our sensing to know when to step on the gas and when to let the wind take us on an uncharted flight. The master musicians soon learn that anyone can practice their instruments to almost perfect technique. The key to the greatest beauty and truth in life and music is not to be afraid to step into the unknown. It is in the unknown sound world that the greatest gifts are found. In other words, it is in the spontaneous open musical improvisations that we may reap the most benefits. This is what they live and die for. For the last fifteen years Nameless Sound, an organization spearheaded by trombonist/educator/mover and shaker Dave Dove, has brought the core players of improvised music to concertize and interact with his community of the young, the old, and the disenfranchised in Houston Texas; international musicians like Kidd Jordan, Joe McPhee, Peter Bröztmann, Hamid Drake, Roscoe Mitchell, to name a few. Dave Dove does not draw attention to himself. He quietly goes about the business of raising money for his organization Nameless Sound and teaching workshops in all kinds of schools in the Houston area, including a battered women’s home. Dave is also one of the most committed and serious musicians playing today. He strongly maintains his own voice within the pantheon of modern trombonists. He knows how to cast magical spells through years of listening and placing pieces of sound and silence in the right places for that particular moment. Every musical improvisation is indeed a sacred event, whether it be a solo or a shake rattle and roll orchestral piece. It all centers on the love of music joy of sound to paraphrase Mr. Ellington and Mr. Ra. The bassist Damon Smith has evolved into an intriguing musician with endless ideas and enthusiasm. He has been able to touch and explore many areas of stringiness: harmonics, light colors, corrugated pops and slaps as well as electronics and sizzling, dancing pizzicato work. The saxophonist Jason Jackson fulfills his role perfectly as a textural foil to the strings, trombone and drums; getting that searching full palette sound using the horn from the bottom to the top, at times evoking that glorious sound connected to pure creativity. Freedom is ringing, the freedom to play what he wants, when he feels it is appropriate to explore a particular area of sound. If you listen deeply you can hear all kinds of voices in the timbres of his sound. A perfect line partner and blend for the trombone, once again extending the tradition, bringing it up to date; while at the same time making it ageless, which is all part of the larger picture. Thank you Jason for your contribution to the music. When I listen to this music I only hear this music. It reminds me of itself, it is human, it is alive. The point person for the quartet is the veteran Alvin Fielder, one of the rare individuals who are part of the living history of the new music. Alvin is a walking encyclopedia of musical knowledge and drum language, having played on Roscoe Mitchell’s 1966 revolutionary recording Sound! He has composed many compositions dedicated to other drummers, including Max Roach and Ed Blackwell, and made major contributions to the wonderful music of the saxophonists Charles Brackeen and Kidd Jordan, to name a few. Al Fielder is a probing percussionist, very familiar with all the traditions from early jazz to the sounds of ritual, a scientist of sound and invention. Al Fielder lives for the music, and continues to find life in the community of Jackson, Mississippi, organizing and inspiring younger musicians to do the right thing. He continues to keep playing, stepping and finding new ways to pronounce the word freedom. Last and not least is the music itself, waiting for you to listen to it so it can give itself to you. This music is also looking for a home inside the listener, inside the soul and spirit. Open up to open up to open up this music is Now not yesterday or tomorrow, it is in this moment captured but not held captive.