BPA 002 The Sale of Tickets For Money Was Abolished 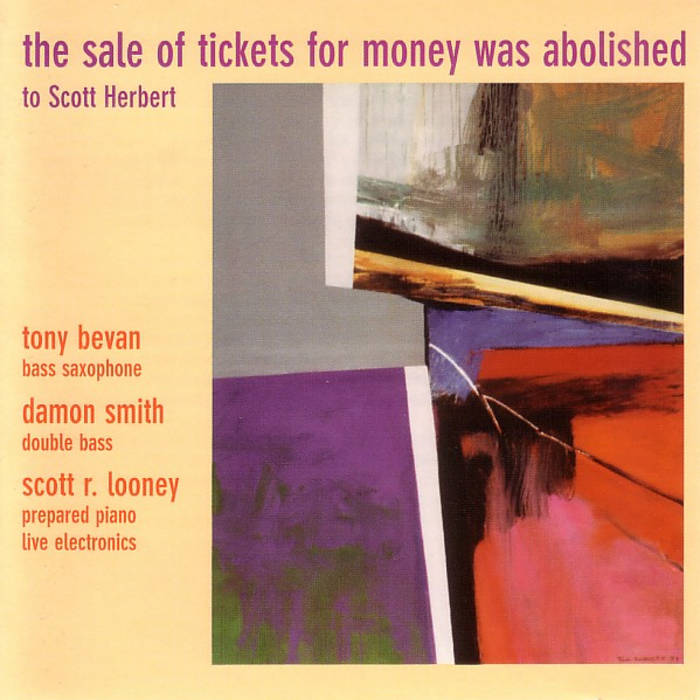 the sale of tickets for money was abolished
to Scott Herbert


The trio on this recording is as much a part of their place in historical evolution as any group operating today, clearly a product of prodigious awareness of history. The subcategories of improvised music are re-revealed and ignored on this recording with satisfying fluidity. As extended instrumental techniques have been exploited by more and more players they become less the property of any one player, and more the building blocks of a worldwide language. Scott Looney's methods of activating (combined with his electronic components) could remind one at times of the inside-the-piano work of say, Paul Bley and Denman Maroney, yet his combining of these languages with an eye on the future comes through. I also hear in him a healthy nod to Cecil Taylor and Sun Ra, and in a way that sounds wonderfully organic. Like his cohort, Damon Smith, a virtual encyclopedia of modern double bass styles and extended techniques, Scott has artifacts in his playing that range from pre-Jazz listening, and combined with Smith interpreting the works of Conlon Nancarrow with Ronnie Boykins!

Tony Bevan is a man after my own heart. To dedicate oneself to the bass saxophone: now this is a statement. And then to play it as he does. Grinding, singing, growling, finishing contrabass or piano notes, or providing the attacks for the notes of others. He is the air traffic controller of this group, taking everything in and giving it back in a new way. I guarantee you have never heard the bass saxophone played like this! While the extreme register instruments have been utilized regularly since the late-60s to the lowest- and highest-pitched instruments of the family full-time. Netherlander Klaas Hekman has traveled the world with his bass sax, and the original master of the instrument was the great Adrian Rollini, who is best know for his work with Bix Beiderbecke and Frank Trumbauer. Now we have Englishman Tony Bevan to add to this list with a singular voice.

All the overblown expectation that built up during the approach of the new century has lifted and now important dynamic shifts can begin without all the pressure of outdated questions. The avant-garde tradition has extended itself beyond analysis that was based in the language of Jazz. The answers are self-evident to those who passionately explore this music. The music poses new questions if you are willing to hear them. Are you really hearing or are you just listening?

The titles all came from The Babylon Lottery by Jorge Luis Borges. For the past eleven years, I have worked for Scott Herbert and the Herbert family business, Just Tix. They are a legitimate ticket broker service.

My job is to wait in line for pop concert and sporting event tickets. The benefits are many: I only work weekends, I am done at 10:00 am, with my CD Walkman I have done a focused and thorough study of the recorded history of creative music, and I get to make money from the corporate music industry!

This makes being a creative musician in America, in this time period, just bearable. This music was recorded right after waiting for Lou Reed tickets, I played a concert with Peter Kowald the night before (That full concert is here: www.youtube.com/watch?v=2b8rJ_1WAj0&t=2721s ), we dropped of my bass at the studio and I rushed over after the ticket onsale that morning. We were pressed for time since Tony had to catch a plane. The titles were worked out while waiting for Dido tickets.

balance point acoustics 002
all instant compositions by bevan/smith/looney except where noted
all pieces are in the original order, no overdubs, with just one small edit to one piece
recorded 4/30/00 between 11:00 am and 1:00 pm
in west oakland california
engineered and produced by scott r. looney
executive producer scott herbert
cover paintings by tom schultz
front: 94/3 back: 94/4 both 48 x 60 acrylic on canvas
photo of damon by brad winter
photo of scott by anthony pidgeon, www.anthonypidgeon.com
layout & graphic design by alan anzalone
all rights reserved by artists
www.bayimproviser.com/bpa
www.bayimproviser.com/damonsmith
www.bayimprovisor.com/scottlooney
www.shef.ac.uk/misc/rep/ps/efi/musician/mbevan.html